Earthing is still new to many people. So it’s hardly surprising that people get confused about earthing and EMF / EMR protection. Does earthing shield you from EMF/ EMRs or not?

The short answer is yes. Earthing can protect us from some human-made electromagnetic fields, especially from low-frequency EMFs.

The Earthing Institute recently published the article Understanding Earthing (Grounding) on just this topic. The authors are Gaetan Chevalier and James L. Oschman. Both have PhDs and are active researchers in the field of earthing. Gaetan Chevalier has a PhD in Engineering Physics and is the director of the Earthing Institute. James L. Oschman has a PhD in biological sciences and is a member of the Scientific Advisory Board for the National Foundation for Alternative Medicine, Washington D.C.

They conclude that “earthing is an overlooked factor in public health” and that it is “a missing link with broad and significant implications” for health.

Before we look closer at their reasoning, let’s brush up on some basic terminology.

EMF is short for electromagnetic field. It’s an invisible field or region of energy made up of waves.

That’s a lot of EMFs from a lot of different devices!

How can you tell one EMF from another? You can measure their frequency or rate at which their energy waves travel through space using Hertz; one Hertz is one cycle per second. However, the waveforms cycles in EMFs can be as high as a billion cycles per second (Gigahertz or GHz). They are also measured in megahertz (MHz) or a million cycles per second. For example, smart meters emit electromagnetic waves in the range from 2.4 to 5.9 GHz, while mobile phones have a frequency range from 850 to 2,100 MHz. Standard and AC wiring and the usual household electrical appliances emit EMFs of 50 Hz.

When people talk about EMFs and health, they are generally concerned with EMFs in the 50 Hz to 3 GHz range.

Earthing is effective at deflecting low EMFs of 100,000 Hz and less. It protects you from EMFs from AC electrical wiring and most household appliances. No research has been done on earthing and mobile phones or other higher frequency EMFs such as wi-fi and smart meters. It is unclear whether earthing offers any protection. It may or may not.

Low-frequency EMFs in Your Home and Workplace

If you look around your home or office, you’ll see many appliances that emit low-frequency EMFs of 50 Hz. These include:

Any appliance that is plugged into the electricity mains emits an EMF whenever it is turned on at the wall. The appliance itself does not even need to be turned on.

The strength of low-frequency EMF diminishes quickly the further you are away. That means that you are only receiving the full strength of the EMF when you are close by.

If you’ve ever done a multimeter test around your home, you’ll see that the AC voltage in your body goes up when you get closer to your appliances and light fixtures. This is actually a measure of the effect of the AC electrical field on your body.

Some people refer to this as dirty electricity. But it’s important to understand that these EMFs are not electricity per se.

In Australia, our standard AC (alternating current) electricity is created from electricity generators that start electrons wiggling (oscillating at 50 Hz per second) within power lines and cables that transmit energy to our homes.

Electromagnetic fields have no electrons. They do not have electrical current in and of themselves. But EMFs can make currents where electrons exist, that is, in a conductive medium.

Your body is actually conductive. It contains a large number of charged ions called electrolytes that live within your blood and around your cells. The electrons in your body will wiggle too if they come into close contact with an electromagnetic field! That’s why our body AC voltage (as measured with a multimeter) goes up when we get closer to an appliance or AC electrical wiring.

As, Chevalier & Oschman point out, when your body is grounded, electrons can’t wiggle!

You can see this in the following multimeter test that Gaetan Chevalier did in a standard hotel room. First he measured the AC volts of a person sitting on the hotel bed with her back to the headboard next to a wall with all appliances in the room plugged in and turned on. Then he turned the appliances off and disconnected them one by one. Finally, he measured her AC voltage when grounding. Compare the readings:

You can see what a big difference earthing makes. Even with all devices disconnected, there was a significant drop in body voltage when the person started earthing. Their body voltage while earthing was only 3% of the amount when they were unearthed with all appliances in the room disconnected.

Most importantly, you don’t need to unplug all your appliances for this drop in body voltage to occur while earthing.

Once you ground yourself with an earthing device then your body will repel the electromagnetic fields emanating from the appliances and wiring in your home or office. This includes the EMFs from the wiring behind your walls as well. Chevalier’s experiment shows this by having the subject lean against the headboard/wall in the hotel room. 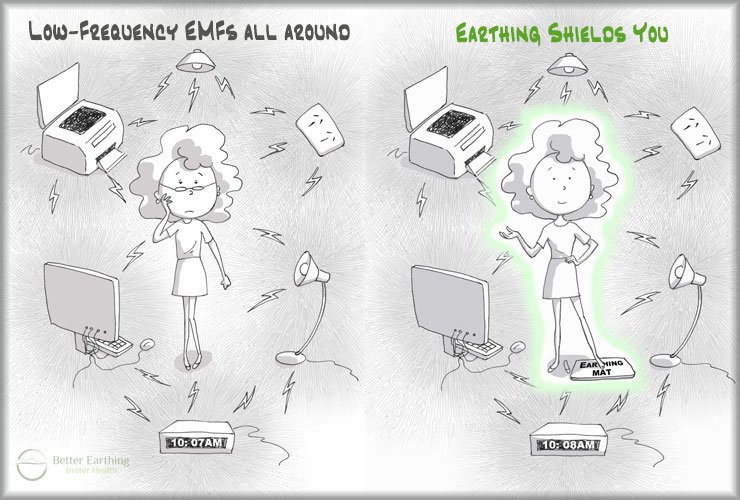 Earthing and the Umbrella Effect

When you are earthed, the AC field inside your body reduces dramatically (often almost to zero volts).

However, this isn’t the only thing that happens.

The AC electrical fields directly above and around the body increase. Use an electrical field power meter to measure the field around your body while earthing. You’ll find the 50 Hz AC electric field is higher than when you are unearthed.

This is because when you are earthed, EMFs in your body are pushed away or deflected.

This is called the “umbrella effect”, after Nobel Prize winner Richard Feynman’s classic lectures on electromagnetism in the 1960s. A review paper in the Journal of Environmental and Public Health explains:

Feynman said that when the body’s potential is the same as the Earth’s electric potential (and thus grounded), it becomes an extension of the Earth’s gigantic electric system. The Earth’s potential thus becomes the “working agent that cancels, reduces, or pushes away electric fields from the body.”

Earthing is very effective at protecting the body from low-frequency EMFs such as those generated by AC electrical devices and wiring.

Does Earthing Turn Your Body into an Antenna?

Some people are concerned that earthing attracts EMFs to you like a radio signal or an antenna. They say EMFs are pulled towards any earthed body, attracted by the shortest route to the ground. In other words your body acts as an antenna. This is a misunderstanding.

Firstly, EMFs are not electricity or electrical currents – they do not seek the shortest path to the ground or the path of least resistance. EMFs will not rush over to you (whether you are earthed or not). You have to move into the region or space where the EMFs are.

Secondly, when you are earthed or grounded, the ‘umbrella effect’ comes into play. Earthing shields your body from EMFs and repels them – pushing them up and away from the body.

Can Earthing Give You an Electric Shock?

There is no risk of electric shock from earthing products as long as you use them with a specially constructed earthing adapter such as the one manufactured by Better Earthing. If you look closer at an earthing adapter, you’ll see that they differ from standard electrical plugs in that they have two plastic pins, rather than metal, at the top. Only the third pin is metal for connecting to grounding / earthing wire that is in turn connected to a metal plate near your home. The grounding of electricity mains is a legal requirement under Standards Australia code of practice.

As an additional precaution, Better Earthing products have two independent resistors (a total of 100,000 ohms) fitted in the adapter and the lead so barely a mosquito bite of electricity could pass through even if you somehow forced electricity into the adapter.

As we’ve seen, earthing shields us from low-frequency EMFs. The primary and biggest health benefits of earthing come from taking advantage of the unlimited supply of free electrons from the earth.

Earthing researchers believe that it’s these electrons from the earth that are responsible for the many health benefits of earthing. Your body uses free electrons to rebalance itself. They act like antioxidants, get rid of excess free radicals and fight chronic inflammation. This seems to be the reason why so many people have reported major health improvements over time with earthing.

It is exciting that many of these reported benefits are being verified by preliminary clinical trials. Positive results have been shown in the areas of blood flow, improved muscle tone, faster muscle repair, pain reduction, improved sleep, immune response, heart-rate variability among other benefits. We’ve reported on the results of these scientific studies in many of our better health articles.

How to Start Earthing Indoors

You can grab yourself an earthing mat to use at your computer or while relaxing at home. It’s surprising how many places you can use it – you can put it on a chair and sit on it, place it on the floor and rest your feet on it, or use it at your computer desk and rest your arms on it while you type. Better Earthing mats work effectively through light to medium socks and clothing so they are easy to use in the office (no bare feet required). Some people find that they feel less drained at the end of the working day. Read testimonials and find out more on our Better Earthing mats page.

Gaetan Chevalier, ‘How to Measure the Effect of Earthing on Body Voltage’, Unpublished.