Earthing as a Natural Anti Inflammatory for Pain Relief

Do you regularly have an old-injury that arcs up when you work too hard? Or have you got a pain that comes and goes depending upon your stress levels.

As we age, our body builds up low-grade, chronic, systemic inflammation. That means acute pain can more easily turn into chronic pain for older adults according to recent research.

While anti inflammatory medications might seem the obvious choice, there are natural options.

Earthing or grounding is a safe and natural anti inflammatory that reduces pain and can help wind up acute inflammation before it progresses to swelling and loss of mobility.

It also helps reduce the build up of chronic inflammation, that silent or hidden inflammation that is linked to diseases such as diabetes, heart disease, high blood pressure, asthma, irritable bowel disease and more.

Chronic inflammation is a problem that you can prevent and fix through changes in lifestyle including earthing.

When you are injured or invaded by pathogens such as bacteria and viruses, your immune system springs into action. Blood vessels dilate, increasing blood flow to the affected area, resulting in redness and warmth. Capillaries become more permeable, allowing
fluids and proteins to pass more easily between the blood and cells.

Specialized white blood cells called neutrophils are summoned to the area. These contain special enzymes which are used to destroy pathogens. They also secrete something called reactive oxygen species (ROS), more commonly known as free radicals. Free radicals help to break down damaged tissues and cells. However, during the process, they can leak into healthy tissues and damage them. This can cause pain and swelling.

If this goes on too long, it can result in problems such as chronic pain and loss of mobility in the joints, spine or muscles.

Chronic inflammation is also responsible for conditions such as asthma, inflammatory bowel disease and Crohn’s disease. It has also been linked to increased risk of serious illnesses like heart disease, diabetes and even some forms of cancer.

Inflammation and the Healing Process

Inflammation helps the healing process by supporting the removal of dead white blood cells and other waste material. These are discharged from the body as pus. This makes space for new tissues to be formed, allowing wounds and injuries to heal.

Because inflammation also causes heat, swelling and pain, it brings your attention to any injured areas. This allows you to take steps to protect the area as it heals and prevent it from becoming worse.

Why Does Inflammation Cause Pain?

Acute inflammation is a helpful process, but it can be painful too. This is because during the inflammatory response, blood vessels dilate and become more permeable. This allows more blood and other fluids into the area, carrying white blood cells and proteins. This influx causes heat, redness and swelling, and makes it more difficult to move the affected body part.

These extra fluids also cause pressure to increase in the inflamed area. This pushes against nerve endings, sending pain signals to the brain. This is why over time, inflammation causes problems such as arthritis, joint or spine pain and other painful conditions.

Anti Inflammatory Medications and their Side Effects

These drugs effectively relieve inflammation and pain, but can have some serious side effects. The most common of these are irritation of the stomach lining, increased risk of gastric bleeding and ulcers. This risk can be reduced by always taking NSAIDs with or after food, or using them in a topical application such as a cream or gel.

Other possible side effects of NSAIDs include allergies, worsening of asthma and increased risk of liver or kidney disease.

Corticosteroids are another class of drugs which can be used to reduce inflammation. For problems such as joint pain, they are normally given as a injection directly to the affected part. Side effects include bruising, infection, changes in skin colour and increased blood pressure or blood sugar.

Disease modifying anti-rheumatic drugs (DMARDs) include medications such as methotrexate and sulfasalzine. These can be used to treat severe internal inflammatory diseases such as rheumatoid arthritis or colitis. The most common side effects are upset stomach, nausea and diarrhoea. DMARDs can also cause weakened immunity, hair loss, fatigue and liver damage.

One of the most well known of these is turmeric. Turmeric is a spice which has been used in Ayurvedic and traditional Chinese medicine for thousands of years. It contains the active compound curcumin which has natural anti-inflammatory properties and has been researched for the treatment of a wide range of conditions including arthritis.

Green tea is another natural anti-inflammatory. It contains chemicals called catechins which are thought to have an antioxidant, anti-inflammatory effect within the body. To get the full benefits of green tea, it is recommended that you drink 3-4 cups daily, but green tea extract is also available in supplement form.

Other foods to include in an anti-inflammatory diet are cruciferous vegetables like broccoli, Brussels sprouts and kale, berries, onions, whole grains and spices such as turmeric, ginger and cayenne pepper.

Avoid eating highly processed foods, refined sugars and trans fats as these are all thought to contribute to inflammation.

Earthing as an Anti Inflammatory

Earthing, also known as grounding, is the practice of being in conductive contact with the earth. You can do this by walking barefoot or by using a conductive earthing product.

The earth’s surface holds a negative electrical charge, due to constant lightening strikes across the world. This creates a plenty of free electrons, smallest unit of negative charge.

The human body can be brought into conductive contact with the earth, either by walking barefoot or using an indoor earthing system. Researchers believe that this allows free electrons to be transferred to the body, where they act as powerful antioxidants.

Antioxidants are substances which work to neutralize free radicals. Electrons have a negative electrical charge, whereas free radicals are positive. This means that the electrons are able to react with and neutralise free radicals before they have the opportunity to damage healthy tissues.

Dr James Oschman, an expert and author in the field of energy medicine, explains:

“Inflammation, which in medicine is considered an important part of the healing process, is really an artifact caused by lack of electrons in your tissues. What happens is, the neutrophils deliver the Reactive Oxygen Species (ROS) to the site of injury, but in so doing, some of those free radicals can leak into the surrounding tissue and damage healthy tissue. That’s what creates the inflammatory response”.

“So really what is happening with grounding or earthing is that you’re protecting your body from — I call it, collateral damage”

So by providing these antioxidant free electrons, earthing can stop inflammation in its tracks. This helps to prevent the pain, stiffness and other health risks associated with it. Read more about the benefits of earthing here.

Research has shown that earthing has a number of physiological effects on the body, including reducing inflammation and pain. A 2010 study looked at the effects of earthing on delayed onset muscle soreness (DOMS). This is a common condition which occurs following excessive exercise.

It measured a total of 48 different inflammatory markers including white blood cells, hormones and enzymes. The subjects all underwent the same, strenuous exercise and had their blood sampled before and at 24, 48 and 72 hours afterwards.

Half of the subjects were earthed using conductive patches and sheets, while the other half were sham earthed as a control group. The researchers found that after earthing, 30 of the 48 markers were significantly different between the two groups. White blood cell levels were reduced in the earthed subjects and they reported less subjective pain and faster recovery time. 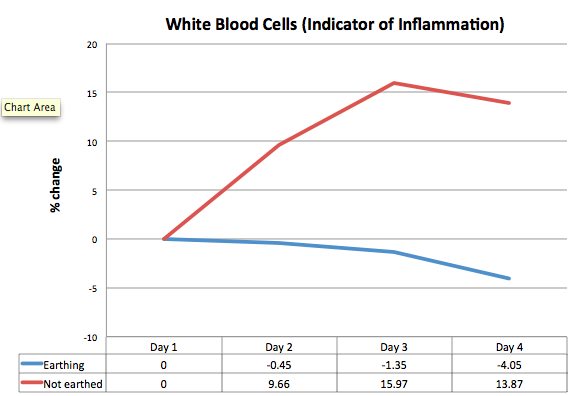 This suggests that earthing not only reduces inflammation but also helps to speed up the healing process. This is corroborated by Dr William Amalu’s 20 cases studies that used medical infrared imagery to document the reduction of inflammation with earthing.

We’ve seen how earthing helps avoids the buildup of inflammation in the body, by speeding up the healing process and reducing the number of free radicals present in the body. We’ve also seen how in cases of chronic pain, earthing can reduce inflammation. With the lifestyle practice of earthing, free electrons can help resolve chronic inflammation by acting like antioxidants. When we top up on high antioxidant foods and supplements we have the same goal in mind, get rid of excess free radicals and put out the fires of silent, hidden inflammation.

The easiest way to experience the benefits of earthing is by walking barefoot on green grass or sand. However, because this is not always possible, indoor earthing products have been developed.

These include mats, pads and sheets which have been interwoven with conductive fibres. You connect them to the earth via a wire and a grounded rod, or through the earth port of your power outlet. Indoor earthing systems allow you to enjoy earthing and reduce inflammation in the comfort of your own home while you work, rest or sleep. View our range of earthing products.