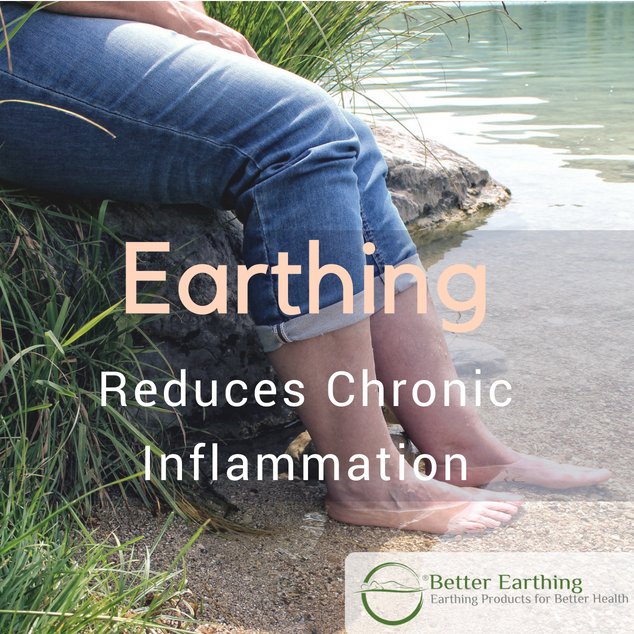 Perhaps the biggest health benefit that Earthing can give us is its ability to tackle chronic inflammation or ongoing inflammation.

Many serious conditions such as heart disease, stroke, diabetes and certain forms of cancer have links to chronic inflammation. ‘Cooling the fires of hidden inflammation may be the most important thing you can do for your long-term health and wellbeing’, according to Dr Mark Hyman the editor in chief of Alternative Therapies in Health and Medicine.

The word inflammation comes from the Latin word ‘Inflammatio’, which means ‘to set on fire’. The job of this fire is to eliminate harmful bacteria, viruses, allergens, and irritants in the body. It is part of a life-saving process which prevents pathogens from causing serious harm.

However, when this inflammatory process fails to shut off, or becomes ongoing, it can have damaging effects throughout the body. When the fires of acute inflammation keep on burning, even after the harmful agents that triggered it have all been destroyed, then you have the not-so-welcome chronic inflammation.

This table shows a few of the major health conditions that medical research now links to chronic inflammation.

Fortunately there are plenty of steps you can take to reduce your risk of chronic inflammation. These include dietary and lifestyle changes and other strategies such as earthing. Earthing simply means bringing your body into conductive contact with the earth. This is thought to have a wealth of benefits for health and well-being, including reducing inflammation.

Everybody has experienced inflammation at some point during their lives. Whether you have cut your finger or suffered a sore throat, you will recognise the familiar signs of redness, swelling, heat and pain.

When you injure yourself or are exposed to infection, your immune system springs into action. Foreign invaders such as bacteria and viruses are detected and white blood cells are summoned to the area to destroy them. A complex series of chemical reactions follow resulting in a protective barrier being formed around the affected tissues while the threat is removed.

Within this barrier, specialized white blood cells called neutrophils release molecules known as free radicals. These free radicals react with and destroy the invading pathogen. Once this has happened, the inflammatory response should shut off allowing healing to begin. However, sometimes this does not happen. The immune system continues to work, causing more inflammation and allowing free radicals to begin to damage the body’s own tissues.

What are the Symptoms of Chronic Inflammation?

Chronic inflammation causes symptoms throughout the whole body. These can include widespread pain, fatigue, low immunity, allergies, asthma, depression or anxiety, digestive problems, skin diseases such as eczema and psoriasis and gum disease.

As chronic inflammation can be difficult to diagnose, people can suffer for years without really knowing the cause of their symptoms.

Additionally, chronic inflammation has been linked to a number of serious diseases. It can contribute to cardiovascular disease, heart attacks, strokes, diabetes, Parkinson’s disease, Alzheimer’s disease and some forms of cancer.

Chronic inflammation is far more common in women than men, especially as they reach the menopause. It is thought that hormonal changes could play a part. It is also more common in older people.

People who are frequently injured such as athletes are also at higher risk of inflammation. Other triggers include environmental factors, smoking, a diet high in processed, pro-inflammatory foods, stress and allergies. There may also be a genetic factor.

Testing for C-reactive protein is currently one of the only ways to identify inflammation. However, this test cannot distinguish between acute inflammation, due to a recent trauma or infection, and chronic inflammation.

Therefore, it can be difficult to get a definitive diagnosis of chronic inflammation. If you suspect you may be affected by this condition, you will need to take into account your symptoms, lifestyle and genetic risk factors. It is also necessary to rule out any other possible causes of your symptoms.

By putting together the puzzle pieces in this way, it is possible to finally reach a diagnosis of chronic inflammation and treat appropriately.

One of the best ways to improve chronic inflammation is by making changes to your lifestyle and diet.

Certain foods are known to aggravate inflammatory conditions. These include processed and packaged foods, vegetable oils and margarine, fried food and sugary food and drinks. Try to keep these to a minimum in your diet.

Eat more fresh vegetables and low sugar fruits such as berries. Include foods which are rich in “good fats” and omega 3 fatty acids such as olive oil, oily fish and avocados. Ensure that meat and poultry are free-range and eat organic whenever possible.

By adjusting your diet in this way, you will increase your intake of valuable vitamins and minerals and reduce pro-inflammatory chemicals. By eating a healthy, balanced and natural diet, you also keep your insulin levels in check and reduce the risk of obesity and diabetes.

One spice which is particularly well known for its anti-inflammatory properties is turmeric. Turmeric contains a chemical called curcumin and has long been used in traditional medicine to treat all kinds of inflammatory conditions. You can incorporate turmeric into your daily diet by adding it to meals or smoothies or take it in supplement form.

As well as making dietary changes, taking some regular exercise can help to reduce inflammation. Being active for at least 30 minutes each day helps to reduce body fat and improve circulation. It also reduces your risk of developing serious health problems later in life.

Try to get a good night’s sleep as this reduces stress and regulates hormone levels within the body. Go to bed at the same time every night, avoid eating or drinking caffeinated drinks late in the evening and keep your bedroom as a haven for sleeping. Avoid watching television and looking at computer or mobile phone screens before bed and try relaxing by reading a book instead.

Finally, avoid coming into contact with harsh chemical products. Switch your household cleaning products and toiletries for natural brands, choose organic food, and if you smoke, find a way to stop as soon as possible.

Another way to reduce inflammation naturally is with earthing. Earthing, also known as grounding, works on the principle that the earth’s surface carries a subtle negative charge. This is due to a plentiful supply of free electrons created by constant lightning strikes across the world.

When you bring your body into conductive contact with the earth, these free electrons act as powerful antioxidants. Antioxidants are one of the best weapons in fighting the harmful effects of free radicals and reducing inflammation.

In the past, people frequently walked barefoot or wore shoes made out of conductive animal skins. Now, we wear shoes with insulating, rubber soles and live in high rise buildings, isolating ourselves from the earth. Perhaps it is no coincidence that inflammatory diseases are on the rise.

A 2015 research study published in the Journal of Inflammation states:

“The disconnection from the Earth may be an important, insidious, and overlooked contribution to physiological dysfunction and to the alarming global rise in non-communicable, inflammatory-related chronic diseases.”

“Accumulating experiences and research on earthing, or grounding, point to the emergence of a simple, natural, and accessible health strategy against chronic inflammation, warranting the serious attention of clinicians and researchers.”

This study found that earthing improved wound healing, sleep, immune response and pain. It suggests that earthing could be one of the most simple and effective ways of reducing inflammation and all of its associated issues.

Earthing can be done by walking barefoot on the earth or by using a specially designed indoor earthing product such as an earthing mat, pad or sleep system.

View a comprehensive list of the health benefits of earthing.

Earthing Improves Immune Response and Speeds Up Recovery from Injury

Earthing has been shown to relieve acute inflammation and speed up healing and recovery time. A 2010 pilot study published in the Journal of Alternative and Complementary Medicine looked at the effects of earthing on delayed onset muscle soreness (DOMS).

DOMS is a common condition which occurs following excessive exercise. The subjects in this study took part in vigorous exercise and were assigned to one of two groups – earthing or sham earthing (control).

Tests showed that earthing reduced levels of certain white blood cells and other markers associated with inflammation. The subjects in the earthing group also experienced less pain and faster recovery time than those in the control group.

Another hormone involved in the inflammatory response is cortisol. Cortisol is secreted by the adrenal glands and is one of the hormones involved in the “fight or flight” response to stress. It also helps wind down or stop inflammatory processes. Cortisol should naturally peak at around 8am in the morning and reduce as the day goes on. Having increased cortisol levels throughout the day is associated with chronic stress, poor sleep, inflammation and pain.

A 2004 study published in the Journal of Alternative and Complementary Medicine explored the effects of earthing overnight on the human body, specifically on cortisol levels. Earthing was been shown to regulate cortisol levels, bringing them back into a normal range. The earthed subject in this study reported improved sleep, reduced emotional stress and less pain.

One of the major factors in chronic inflammation is the overproduction of free radicals by the immune system. Free radicals are unstable molecules with a positive electrical charge. In order to become more stable, they “steal” a negatively charged electron from another molecule’s outer shell.

This is an important function as it helps the immune system to destroy invading pathogens. However, when left unchecked, free radicals can attack and damage healthy cells and tissues, resulting in disease.

Antioxidants are substances which neutralize free radicals. For example, the earth’s free electrons have a negative charge. When positively charged free radicals come into contact with these negatively charged electrons, their charge becomes neutral. This stops the chain reaction of tissue damage and inflammation.

Earthing is one way of utilizing these free electrons within the body. This is why researchers believe that earthing may work well against chronic inflammation as well as a whole host of other conditions.

The easiest way to bring yourself into conductive contact with the earth and benefit from its free electrons is to walk barefoot upon its surface. However, that is not always possible, which is why a wide range of indoor earthing products are now available.

Indoor earthing systems are connected to the earth via a wire leading to an earthing rod, inserted into the ground, or through the earth port of your power outlet. This allows you to safely and conveniently enjoy the benefits of earthing while you work, rest or sleep.